This beautiful child calls me Antey. She turned 11 yesterday, and I have no idea how she is eleven already. I suppose in the same fashion that Lorin is already 17 and Brandon 12. And Clinton – forever 7. Everyone gets so busy with life and before you know – the kids are all grown up.  My goal is to celebrate these children and how they make me a better person.

In the same way that our family recycles faces, we recycle names. This beauty is my great niece – the first of the greats. She got her name from my grandmother – Jennie, who gave it to Jenna’s mother Jennie (we just enhanced it a little). We also added my middle name Lyn, because – well, Jennie’s middle name is also Lynn (after me, but my brother spelled it wrong). I made sure I was not only in the delivery room grabbing this beautiful head, but my best-friend delivered her – so we got to fill out – no sign – the request for her official birth certificate. No mis-spellings this time! The lengths I have to go through. Secretly, I think her mother wanted her name to be Madisyn or Peyton, but this child is surely a Jenna. So I was right. 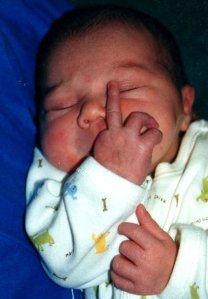 Jenna’s mom had moved to Maryland to go to college. Some say that Jenna’s timing was not perfect, and they’d be right, because it was impeccable.

She made her mother sick from day one – and my defensive driving skills while having a vomiting passenger commenced.  Somehow in the madness of Southern Maryland traffic, we got through it. So you see, Jenna made me a better driver. I’ve been in plenty of deliveries and this one was special. I swore my bff had lost her mind when she placed all the “organs” outside of the incision for just a looksy. She actually told Jennie to shut up at one point and we ignored the medical talk about just feeling like you have to throw up – until she did just that – right in the OR.

The night before Jenna was born – we stayed up nearly all night – so we were already a hot mess when we got to the OR.  All I remember are the words “placenta previa” and “get there now”. We got there fast and after Jennie attempting to deliver with underwear on and begging to turn over during the sedation – time completely stopped the second I saw Jenna’s face. She was exactly how I ordered. A picture perfect copy of her mother with no visually identifiable trace of any other DNA.  We brought her home to Marlin Ct. – and months turned into years of sleep deprivation and pure Joy.

There were the common things – like shared cold bugs, pediatrician visits, toddlers gone wild -running around with no clothes, pink eye, Teletubbies, Blues Clues, Dora the Explorer and the messiest little cape cod styled house ever.  I miss these days sometimes more than I can handle.

Before she got her first word out – Jenna had this laugh that only she will ever have and could never be duplicated. It is simply impossible to hear her laugh and not laugh too – and it absolutely makes my day. She does however have a perfect Jones/Roberts/Woodard mix and her laugh can stop certain people in their tracks. They want to laugh – but something instinctual makes them wonder if there isn’t a hint of sarcasm “this joke is on me” sorta thing.

I got to keep her at my house until she was 4 and then she moved out. I was certain I would not survive this, and she didn’t either – but somehow we have managed, with only occasional set-backs. It was about this time too – that she started to read and write. She she labeled me “Antey”. It stuck. I am an Auntie many times over – but the Antey to only one. She is the most beautiful brown eyed girl in the world. A close second is her Mom, who was the center of my world from 6th grade on. Jennie (the Mom, keep up) is my first born niece almost daughter.  Now, clearly – there were many who thought Jennie was born way too soon too. I remember the exact day and moment I found out she was due – and thought to myself – why are all these people upset? I think this is the best thing to ever happen to this family. Now, looking back – I still don’t think I was wrong.

The next part of this story would be, I moved to Tennessee and Jenna and I were certain this was not survivable. Sure, she’d come in the summer but you – know it’s just not the same. I am ever so thankful that phone plans are now unlimited minutes. Refereeing discussions between two other Woodard girls is always a fun thing for Antey’s to do.  The summer of 2010 she came to TN, and when the kids here returned to school – she stayed.  Her plan all along may have been to have a week with Antey to herself as she grinned when we dropped Lorin and Brandon off each morning. Good thing Maryland doesn’t start school on the same schedule.”I need my Antey” campaign started in full assault mode – and we’re taking no prisoner’s.So what is she like? I mean, other than beautiful? She has a heart of pure gold. She worries about others above herself – and she desperately tries to fit in, when she shouldn’t have to. She is the sweetest thing ever and has mastered the use of the sweet voice.  She can add the word “so” a lot of times to the phrase I love you, and when I say, but I love you more than that – she’ll say “I know you do”.  She loves peace signs, or anything from the 70’s – and is possibly the coolest kid ever. She went through a Full House phase that didn’t bother me one bit. Uncle Jessie is Uncle Jessie after all.

She wrote an assignment for “special persons day” in 2010 that Antey flew to MD and back in one day to attend. See paper to the left. All about me – her special person. Apparently, special person is now politically correct for “Grandparent’s Day”, but – call it what it was – it was me and hearing aids in a catholic school.  My kind of Heaven. But all that mattered was the brown curly haired, brown eyed girl up on the stage singing her heart out, like she was the only one there.  The teacher who was clearly too young to teach said “look everyone, it’s Antey from TN”. Apparently, Jenna is a storyteller. Imagine that.  She sweet talked her way into something we were not supposed to do, but I can not recall what it was.

Jenna snuggles into a hug like no other. She has skill like a stealth ninja if you attempt the sneak out of her room while she sleeps sort of trick.   Intel has not confirmed this fully, but I believe this past summer Jenna and I may have been put on punishment together. For all Woodard girl out blog post readers -is this a common theme? We didn’t do anything wrong. We just had some fun. Wouldn’t you? Anteyhood is a gift and one I intend on celebrating every chance we get.

My wishes for Jenna are like those of any other Antey. Success, good health, and most importantly someone who loves her for her without changing her. Or deal with me.

I look at her often and wonder if everyone else sees and appreciates how beautiful she really is.